Do Truncated Domes Have to be Yellow? and Other Key Questions About Detectable Warning Systems

For many decades, the unique needs of people with disabilities were not taken into consideration when designing public spaces. Fortunately, that finally changed in 1990, with the passing of the Americans with Disabilities Act, or ADA. Among other things, the ADA sets the minimum accessibility standards that must be observed when designing and constructing new buildings and other public spaces. 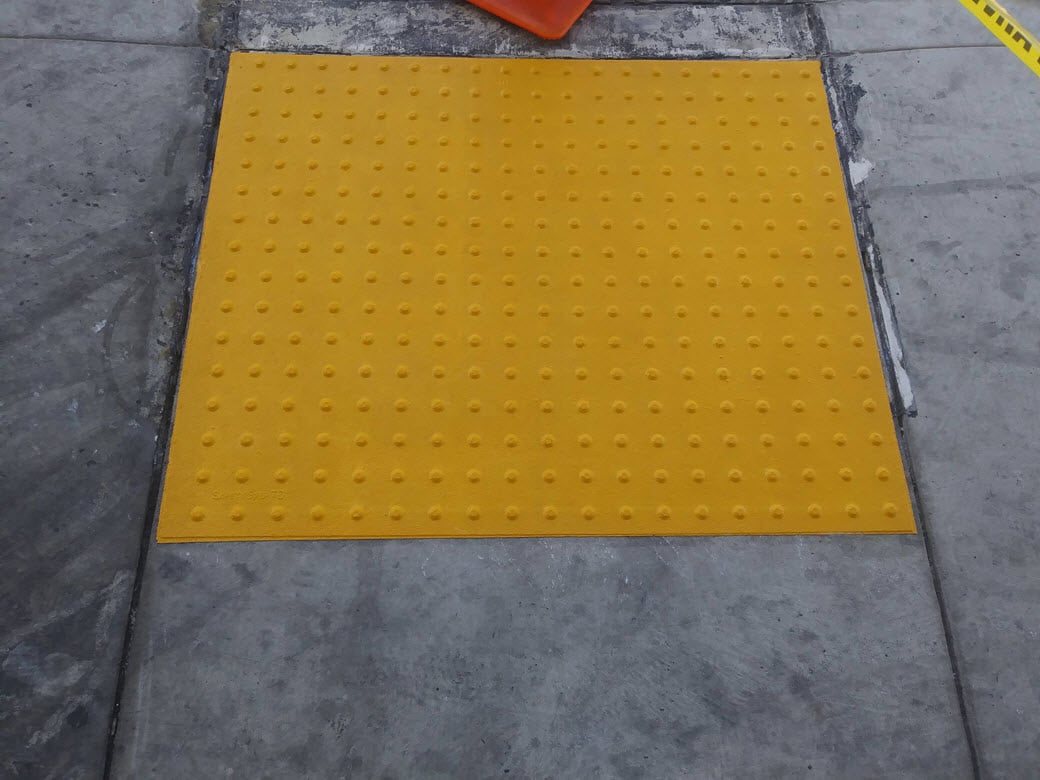 One of the most conspicuous elements of ADA design goes by the name of truncated domes. While most people have encountered this feature in their daily lives, few understand their purpose—let alone the rules governing their use. Whether you are an architect, a property owner, or a person with disabilities, read on to learn the answer to "Do truncated domes have to be yellow?" and other common questions about this vital ADA feature.

What are truncated domes?

Truncated domes are the key feature of what the ADA refers to as detectable warning surfaces. For that reason, many people and institutions now use the two terms interchangeably. A detectable warning surface consists of a surface studded with low bumps—or truncated domes, as they are technically known. Their purpose is to alert individuals that they are approaching a street crossing or a potentially hazardous drop-off.

Truncated domes must be conspicuous enough that they can be detected both underfoot and with a cane. Meanwhile, they must not become so obtrusive that they present a mobility problem for others. In order to balance these diverging needs, the ADA places strict regulations on the height, width, and spacing of truncated domes.

Where are truncated domes used?

Truncated domes are used primarily on transit platforms and at curb ramps. That said, they may be placed anywhere that additional tactile warning about potential hazards is needed. Since 1991, the ADA has required that all transit platform edges—for instance, those in a subway or elevated rail system—contain truncated domes.

Since 2001, the ADA has also required that all curb ramps contain truncated domes. Curb ramps themselves became mandatory following the 1990 ADA, which required them to be installed anywhere that streets and sidewalks intersected. These curb ramps were intended to increase accessibility for individuals with wheel chairs and other mobility devices.

Yet the curb ramps created an unintended difficulty for those with low vision, by eliminating the visual cue created by the edge of a sidewalk. Truncated domes solved that problem by creating both a visual and a tactile warning that an elevation change was occurring. Truncated domes are the only type of warning system permissible for such uses.

Do truncated domes have to be yellow?

The majority of truncated domes feature a bright yellow color. In fact, yellow domes are so common that many people assume the ADA requires them to be that color. This, however, is not the case. Truncated domes do not have to be yellow.

The ADA's only stipulation in that regard has to do with the amount of contrast created by the truncated domes. To quote directly, the ADA states that:

In other words, federal law allows a degree of leniency when it comes to choosing the color of truncated domes. Be aware, however, that certain states have additional regulations regarding the color of detectable warning systems. California, for instance, requires that all truncated domes installed on public property be yellow. The only exception to that rule would be if the surface itself also had a yellow color.

What other colors of truncated domes are there?

Even when not mandated by law, yellow remains the most popular color for truncated domes for a number of reasons. To begin with, yellow contrasts easily with a variety of different paving materials, both light and dark. Furthermore, yellow is commonly associated with caution, which increases its utility in hazard warning systems.

The color red serves a similar purpose, while potentially also suggesting that pedestrians should stop and survey their surroundings before proceeding. In other cases, the color of truncated domes may be chosen for purely aesthetic reasons. Provided the domes still fulfill the contrast requirement, such decorative uses are perfectly acceptable. Other commonly encountered colors of truncated domes include:

Manufacturers can also frequently create custom colors depending on the needs and desires of a particular situation. For instance, a business can often install truncated domes that match or augment their branding. Because truncated domes are relatively simple to install and remove, businesses may also opt to periodically swap colors depending on season, sales data, and other factors.

What is the best color if contrast is the only criteria?

The ultimate goal of truncated domes is to increase awareness and reduce the chances of preventable injuries. Even if a certain color meets the minimum contrast requirements, it still might not be as visible as other alternatives. One recent study set out to measure the performance of 52 different sidewalk and truncated dome color combinations.

That study found that red colors (bright red and orange-red, in particular) performed just as well as bright and pale yellow in most circumstances. High reflectance—a property commonly associated with lighter colors—also increased conspicuity, making it easier for people to notice the truncated domes from further away.

How is truncated dome contrast measured?

By now, you know that contrast is the most important factor governing the choice of a truncated dome color. "Light-on-dark" and "dark-on-light" only provide a general strategy to selecting a high contrast color. For a more scientific approach, you must consider what experts refer to the as the luminance contrast.

The study discussed in the section above recommends that the luminance contrast between the sidewalk and the truncated domes be no less than 60 percent. At that level, around 92 percent of the individuals with visual impairments who participated in the study were able to detect the truncated domes from eight feet away.

Truncated domes are more than just a courtesy—they are a structural featured mandated by federal law. To learn more about how select the right truncated domes to meet ADA compliance, contact us at 714-633-0300 to have our experienced ADA team provide a free quote and assist you with your ADA repair needs. Please check out our "Anatomy of a Parking Lot" blog for a more in-depth view of what makes up a parking lot.